Angeliki Asprouli was educated at the National and Kapodistrian University of Athens (BA in Greek Philology with specialization in Linguistics, 2004; BA in Theater Studies, 2019) and at the Paris-Sorbonne University, Paris 4 (MA in Comparative Literature, 2006). She has conducted research in Greek sociolinguistics and on the relation between Greek and French fiction in the 19th century. Parts of her research have been published at the Revue des Etudes Neo-helléniques. She is interested in the uses of folk song and poetry in contemporary Greek theatre. Since 2007, she has taught Ancient and Modern Greek, at all levels, in educational institutions in Greece and in the United States. In 2015, she took part in the design and application of educational drama techniques in the teaching of Modern Greek, at Harvard University. She is currently completing the Seminar for the Teaching of Modern Greek as a Foreign-Second Language, offered by the Center for the Greek Language. 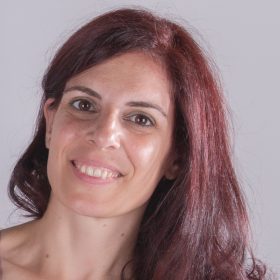