Lena’s approach to Classics is interdisciplinary, and she is particularly curious at present about necropolitical thought and queer voices. Her MPhil dissertation, “Necropolitics in Ovid,” examined the Minyeides episode of Metamorphoses 4 through a necropolitical lens guided by the work of Giorgio Agamben, Achille Mbebme, and Jasbir K. Puar, focusing on Pyramus and Thisbe as depicting the control of racialized bodies and Hermaphroditus and Salmacis as depicting the biopolitical over-living of a trans body. Recently, Lena presented “I WOULD KNOW HIM IN DEATH // HELLO, STRANGER: Achilles, Patroclus, and Fanfiction Refracted” at the February 2021 Queer and the Classical Conference, and she is currently editing her chapter “‘The Idea of Transformation’: Fanfiction, Abductive Reasoning, and Embodied Logic as a Means for Studying Gender and Sexuality in the Ancient World” for the forthcoming volume Forgetting Classics: The Case for Critical Ancient World Studies (Umachandran, M. & Ward, M., eds.). 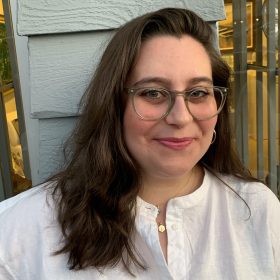