Dr. Zenios received his Ph.D. in Comparative Literature at Harvard University. From 2018 to 2020 he was Lecturer in Modern Greek Language and Culture at the Department of Classics, UCLA, where he designed an integrated Greek language curriculum and offered courses on Greek literature and culture. His research focuses on the relation between aesthetics and political power in the European literature of the long nineteenth century, with emphasis on the lyric poetry of the Greek Revolution. He has been awarded fellowships and research grants from the American School of Classical Studies in Athens, the Friends of the Princeton University Library, and the Mellon-EPIC Program at UCLA. Studies on philhellenic discourses, eighteenth-century rhetoric, Dionysios Solomos, and Greek symbolist poetry have been published and are forthcoming in European and American academic journals. He is currently completing a book project entitled Voice of Power, Voice of Terror: Lyric, Violence, and the Greek Revolution. 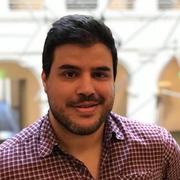