The Department of Classics is delighted to announce that the Society for Classical Studies has awarded Distinguished Professor Amy Richlin a C.J. Goodwin Award of Merit for her book Slave Theater in the Roman Republic: Plautus and Popular Comedy, published by Cambridge University Press in 2017.  To quote from the citation: “The story that unfolds is set in a beleaguered Italy, a land of constant warfare and mass enslavement.  We never forget that Plautus’ career unfolded during Hannibal’s years in Italy and we are challenged to keep in mind that the actors and spectators of these funny things that happened on the way to the forum included survivors of the carnage at Cannae.  The actors, the spectators, and the characters literally embodied the culture and horrors of the time.  Too often beaten, raped, and starved, they made of their experience occasions for laughter – for whatever little laughter can do to assuage or avenge or almost make sense of the effects of violence.”

The Awards Committee also enthused: “The book offers a paradigm of traditional philological scholarship at its very best, enriched by a broad view, a keen eye for the telling detail, and a passionate commitment to hearing and letting us hear the voices of the downtrodden.”

We could not be prouder of Professor Richlin’s achievement and send her our most profound congratulations on this great honor.

To read the full citation, visit the SCS website 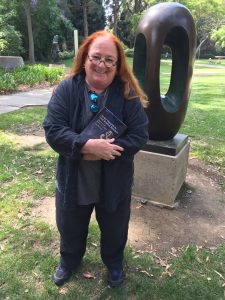