Am I a “Classicist” (BA Classics, Harvard) or a “linguist” (Ph.D. Linguistics, Harvard)? Yes. I specialize in Indo-European linguistics and Latin literature, having taught at Yale and Princeton (Classics) before joining UCLA Classics (and UCLA Indo-European Studies) in 1995.

At the graduate level, I teach Latin literature and composition, and a series of linguistically-oriented courses: history of Latin, Italic dialects, Vulgar Latin, history of Greek, Greek dialects, Mycenaean Greek, and Indo-European phonology and morphology. I particularly enjoy introducing undergraduates to Classical and Indo-European linguistics, and regularly teach undergraduate courses in Greek and Latin literature.

My literary research is engaged with language, style, and meter, and I also work on Archaic Latin and Latin/Italic epigraphy. On the linguistic side: my main interests (mostly involving derivational morphology, historical phonology, and etymology — I hate syntax!) involve the history of Greek and Latin, their development from Proto-Indo-European, and the reconstruction of Proto-Indo-European itself. 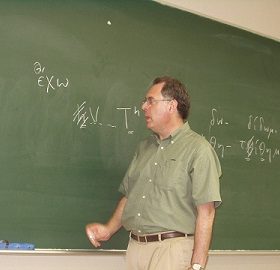