In 2018, Rachel graduated from the University of Kansas with an M.A. in Classical Languages. While at KU, she taught introductory Latin and Greek & Roman Mythology. Her M.A. thesis considered engagements with Ovid’s Metamorphoses by African American women poets. Broadly speaking, she is driven by the questions “What are the uses of the classics?” and “Who claims Greek and Latin texts as their own—and why?” 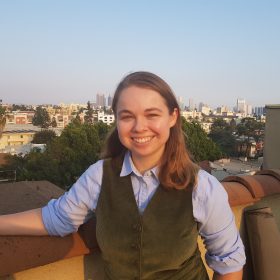