His major publication is Actium and Augustus: The Politics and Emotions of Civil War (University of Michigan, 1996). His interests include Latin literature, ancient biography, Roman numismatics, Cleopatra, and especially the reception of Classics in American popular culture. Most recently, he has become very interested in the early history and architecture of UCLA. Since 2018, he has taught a Fiat Lux seminar that offers a walking tour of the first 40 years of the Westwood campus.

His favorite courses have been Discovering the Romans (Classics 20), Ancient Lives: The Art of Biography (Classics 137), The Female in Roman Thought and Culture (Classics 150B), and Representing Cleopatra (Honors Collegium 5).  Since 2008, he led the UCLA Summer Travel Study Abroad Program in Rome. And he is hoping to teach it again in July 2021, if conditions allow. In Fall 2020, he is teaching the Fiat Lux seminar, Ancient Rome and the Monuments of Washington, D.C.

His two best cities in the world are Rome and Hong Kong. He was a Rome Prize Fellow in 1996-97, and he tries to return to the Eternal City as often as he can, whether to teach or be a tourist. He was a Fulbright Scholar at the Chinese University Hong Kong in 2010-11. As a Fulbright, he was a participant in a four-year, 20-person team effort to assist in building a program of General Education as the eight public universities of Hong Kong prepared to shift from a three to four-year system of undergraduate education in Fall 2012. At Chinese University of Hong Kong he taught a pilot of the foundation course, In Dialogue with Humanity. Since his Fulbright year, he has been actively engaged in promoting the teaching Classics in China and has given public lectures on General Education and Classics, especially on Cleopatra and Hollywood films on Ancient Rome, in Beijing, Shanghai, Guangzhou, Hong Kong, Zhuhai and Macau. He has also taught seminars on Roman history topics at Fudan University, Shanghai Normal University, Beijing Normal University, and most recently Sun Yat-Sen University, Boya College, Guangzhou.

He welcomes questions from Chinese mainland students interested in studying Classics in the U.S. 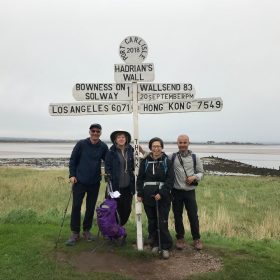