A Victory Ode for the LA Dodgers 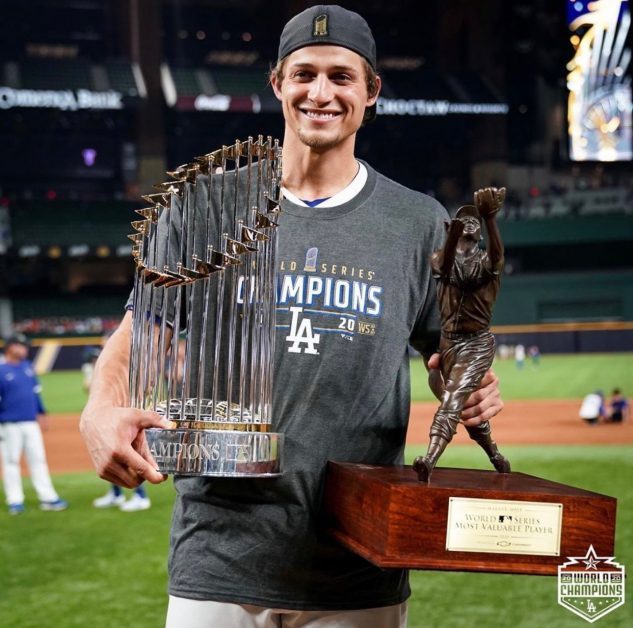 By Kathryn Morgan
I am not a trophy maker, fashioning a rigid-circle of silvered-over flags,
But, sweet song, rise up with the cheers of awestruck spectators
And fly from the stadium of Texas with its shamble-gaited longhorns and their slow-moving cowherds
To the shining city by the sea
To be a messenger (angelos) to the people of the message (angelenos)
Of the glorious victory won by the Dodgers.
One may sidestep for a time the demands of lofty ambition,
But the call of destiny no team may escape,
And, Time, creeping forward, measured a score and more of years until they climbed to the peak of fulfilment

True excellence is won by few.
Who could tell the strikes of Kershaw, the saves of Urias,
The runs of Turner, Betts, and Seager?
I remember that Heracles once in Phlegra conquered a giant
And won for himself immortality and a goddess for a wife.
He set up the Pillars that none may pass; no human may enjoy a future of unending bliss,
But of mortal achievements, O Roberts, your team has reached the limit.
Seek no further.

Warm water does not soothe sore limbs so gently as praise from a countrywoman.
So the song, mingled with nectar of California bees
And the thick sweet wine of the coast and hinterland,
Settles in Chavez Ravine among the coastal hills,
Kissed by the mist.
Truth, the great examiner, stands by me as I swear:
No players in recent years have caused greater joy for their city.
Come, choirs of young and old alike, rouse the Muse and join the dance!

A Victory Ode for the LA Dodgers Continued…

As great as men are now, and names like,
Kershaw, Urías, and Betts hold sway,
still sweet it is to think of former days
as once, when games were still in daylight played
and Brooklyn knew firsthand the pains of autumn tests,
(when groves, not parking lots, filled all Chavez Ravine),
Dem Bums became the champions of the world
when Sandy Amoros from out of nowhere came
to save the day and Yankees, dreaded Yankees
bit the dust at last. True Blue are they
who toast all glories with the selfsame cup
and know full well that you can always look it up.