I joined the UCLA faculty in 2002 after completing my Ph.D. at the University of Pennsylvania and my BA and MA degrees at the University of Nottingham (UK). My main area of interest is Greek literature from the archaic and classical periods. My first book was on space and landscape in the early Greek epic and prose tradition, Space and Time in Ancient Greek Narrative (Cambridge University Press, 2010). More recently, I have written on embodiment and repetition in Greek epic Homer and the Poetics of Gesture  (Oxford University Press, 2019) and published two edited volumes on the senses (Synaesthesia and the Ancient Senses, with Shane Butler, [Acumen/Routledge, 2013], and Touch and the Ancient Senses  [Routledge 2018]).

My current projects include Micro-Sappho, which considers the ontological status of tiny, minute or immaterial words and things in Sappho’s poetry and Blue Homer: Reading the Sea in and beyond the Odyssey – a book whose first half considers the sea in early Greek poetry from the position of depths, surface, and shore, and whose second half considers the color of the sea in Joyce’s Ulysses and immersion underwater in Walcott’s Omeros as a means of reframing Homeric reception.

I am co-organizing with Louise Hornby in the English Department an interdisciplinary conference entitled Elemental Readings I: Air (May 19-20, 2022).

I teach graduate and undergraduate courses in ancient Greek language, literature, and thought, as well as GE courses on Classical Mythology (CL 30) and The Fantastic Journey: Antiquity and Beyond (CL 60). In 2017, I was the recipient of UCLA’s Distinguished Teaching Award, with a special commendation for graduate teaching.

Students interested in pursuing graduate work with me are encouraged to get in touch. You can listen to this interview to learn more about my work, mentoring, and research. 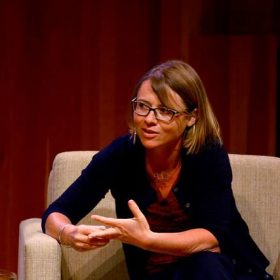