Since my undergraduate days I have been interested in outgroups and muted groups in the Roman empire: women, slaves, sexual minorities, indigenous peoples in the provinces. All my work has focused on the problems inherent in writing the lives of people who left few records for themselves; for me, the urge to write history springs from a sense of duty to bear witness. I was drawn to satire because of its thingness, its apparent materiality, but through satire I was led in my first book, The Garden of Priapus: Sexuality and Aggression in Roman Humor (1983), into issues related to gender and power. That continued to be the focus of many subsequent essays and of two collections: Pornography and Representation in Greece and Rome (1992), and Feminist Theory and the Classics (1993), co-edited with Nancy Sorkin Rabinowitz. Around 2000 I turned back to issues of geopolitics, translating three plays by Plautus that feature Roman attitudes to the Near East and Africa (Rome and the Mysterious Orient, 2005). This led in turn to a book about slavery and human trafficking as attested by early Roman comedy: Slave Theater in the Roman Republic: Plautus and Popular Comedy (2017), which won the Goodwin Award from the SCS.  In 2014 I published a collection of the essays on Roman women’s history I wrote from 1981 to 2001 as Arguments with Silence.  Along with further work on comedy, I will be returning to a long-term project on the amatory letters of the young Marcus Aurelius and his teacher, Cornelius Fronto, for which I had published a new translation of the letters (Marcus Aurelius in Love, 2006); the new book, How Fronto’s Letters Got Lost: Reading Roman Pederasty in Modern Europe, I hope will be done by the end of 2023. Meanwhile, in 2022, I will be giving the Jerome Lectures on “Dirty Words: The Selective Erasure of Latin Literature,” an overview of how Roman pederastic poetry disappears and reappears in the Latin West from late antiquity through the early twentieth century.  On retirement, I am happy to thank my students, from 1973 through 2022, for teaching me so much for all these years. Macte virtute estote. 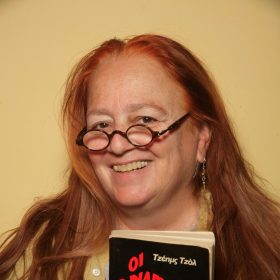